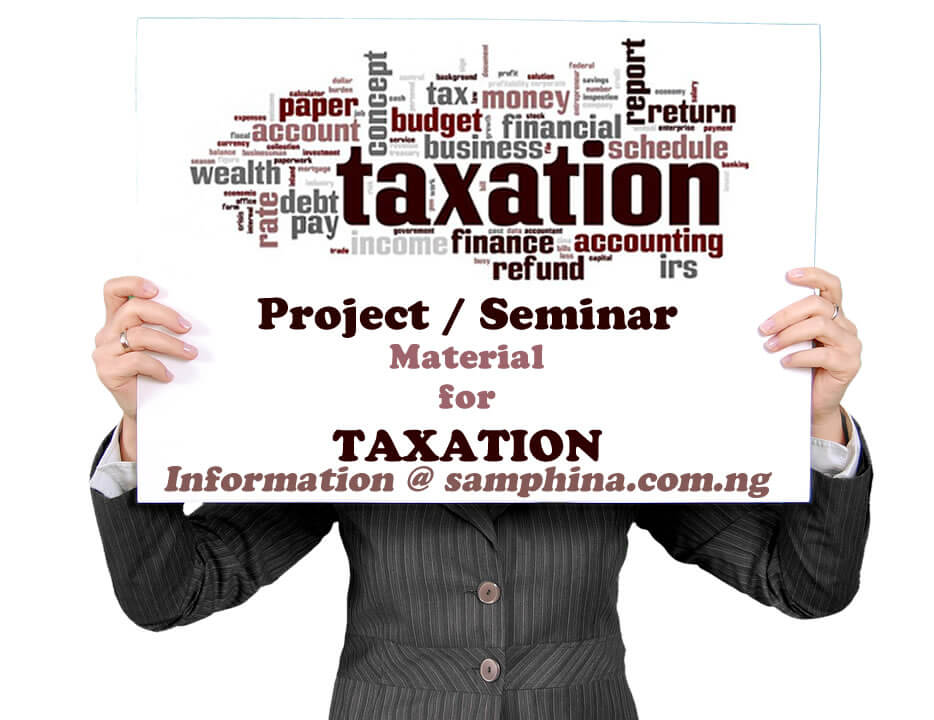 The purpose of this research work is to describe the practical approach to an appraisal of pay-as-you-earn system of taxation with referee to Nssuka local government area. To guide this study, two hypotheses were formulated. A review of literature was down to ensure solid conclusion for the study. A structural questionnaire was developed and administered by the analysis adopted in this research work was chi-square, this method by researcher to ensure that result obtained were real and not by chance.

Based on the above statement some of the major findings include presentation of data and their analysis. The chapter five is discussing a bout the findings made by the researcher and recommendation as well as conclusion.

The global economic recession, which started in 1980’s as a result of decline in the economic growth of industries nation, high rate of inflation, dramatics rise in price of crude oil, increase cost of important a massive building-up of liquidity in the international capital market and unusual fluctuation in commodity prices was not fully felt in Nigeria until 1982, when the developed countries applied a series of restructure monetary and fiscal policies to curtail the a fore-stated problems.

Seventeen years ago, precisely in 1983, the worldbank report that the continuing recession in the industrial world several constrained developed countries growth in 1982. Weakness in the price of oil created difficulties for oil exporting developing countries’’.

Reporting specifically on Nigeria, the bank stated that“ foreign exchange resource declined in 1982 from a level equivalent to three month worth. Investment, equal to about a third of gross domestics product (GDP) in 1980 –1981, has been radically reduced as both foreign exchange and government resource contract (85% of government revenue, both federal and states are direct generated from oil export).

An attempt to wriggle the country out of its financial predicament led to the initially of series of belt-tighten measure since 1982 to date.

Ban on import of a large number of goods, specially taxes on luxury goods, enforcement of trick exchanges control reputation liberalized during the earlier boom, wages and ban on employment in the public sector, increased external borrowing in anticipation of oil income and of late the introduction of value added tax (v.a.t). The impact of the dwindling revenues to the federal government and this ever decreasing portion of statutory allocation to states, has aroused tremendous interest in other source of revenue. Therefore, the hitherto relaxed tax laws are vigorously being enforced while levies of various descriptions are also being in various state of the federation.

In this study, my interest lies in appraising the effective and efficiency of Pay-As-You-Earn (PAYE) as a system of tax collection. The examination of the weakness interest in the system will be carried out and based on empincal observation, make suitable recommendation as to how loopholes in the system could be plugged especially at this time of wide spread awareness of the great potentials of internally generally revenues.

The expectation of the public from governments (local, state and federal) in the developing countries are such that the later are saddle with responsibilities for the provision of various services. The 1979 nigeria constitution sec.16 (a) state. Quite clearly that “the state shall control the national economy in such manner as to secure the maximum welfare, freedom and happiness of every citizen as the basic of social justice and equality of status and opportunities’’.

It is in an attempt to fulfill these expectation and sometimes constitutionals requirement that government rely on, among either source, the imposition of various taxes, weather direct or indirect on the defined taxable persons in their territory. Such tax and poll tax

These taxes are collected at source at source include taxes on dividend interest and rates. Also induction is tax on personal income tax through the Pay-As-You-Earn (PAYE) system has been effective in achieving its objectives of minimizing collection costs and reduction tax evasion while increasing revenue to the local government. We will all look into the problem of the pay-As-You-Earn system and suggest measures to solve such problems that might be identified.

Purpose Of The Study

The purpose of the study can be broken down vas follows:

On the basis of my findings, suggestion and recommendation will be made which I hope would be benefit to the local government it is also hope that future researcher in the area of the public finance would find the work a valuable source of literature.

The significance of adequate revenue for a developing economy such as that of Nigeria cannot be over emphasized. This study is being conducted with a view to exposing the inherent weakness on the Pay-As-You-Earn system of taxation.

The suggestion and recommendation made on how loopholes in the system could be plugged. Especially at this time of widespread weakness of the great potential of internally generated revenue would be very beneficial to the governments.

The local government will find it very useful in drawing up revenue and other methods of taxation which will in turn check the ever dividing revenue to the government.

Statement Of The Hypothesis

A hypothesis is a rational assumption, which subject to fast could be true or false

The following hypothesis were made as a guide for this research ho (i) The effectiveness of the Pay-As-You-Earn system has not affected personal income tax revenue.

Limitation Of The Study

The study was limited by the following constraints:

The period in which the income of a taxpayer is assessed for the purposes.

Income of a taxpayer from all sources in a given basis period less all allowable deductions and nontaxable income.

A basis period by which income of a tax payer in the year proceeding the year of assessment is assessed.

A basis period by which income of a tax payer in the proceeding the year of assessment is assead in that year.

The government financial year in which the income of a taxpayer is assessed for tax purpose.

Deductible allowance granted to a taxpayer by the law in a relevant year of assessment.

An illegal act of paying less tax than ought to pay.

A legal act by a tax payers to pay less than he ought to pay.

Relevant data supplies by a tax payer for the purpose of assessing income.

A document used in the Pay-As-You-Earn scheme in which total allowed relief’s are stated.

The card temporarily used before the tax deduction card are made available to the employer by internal revenue division.

Research Topic: An Appraisal Of Pay-As You Earn System Of Taxation In Nigeria