Importance Of Internet To Students Of Academic Institutions In Nigeria 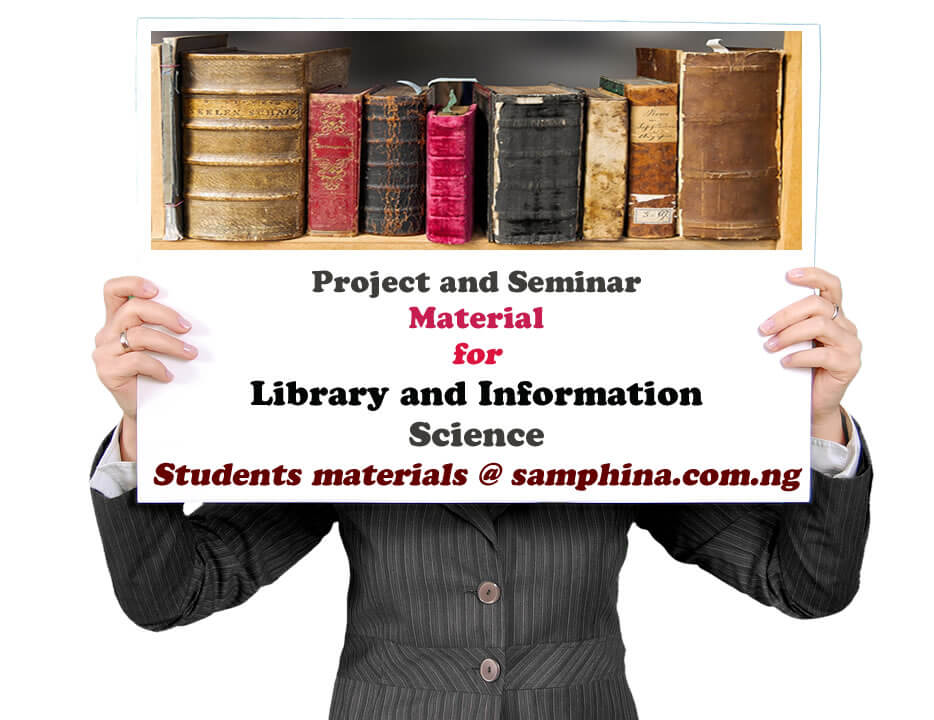 This research investigated the importance of internet to students of academic institutions in Nigeria by library students and students of Imo State University Owerri.

A sample size of 399 of the students was surveyed. The instrument for data collection was questionnaires were used for data analysis.

The study reveals that the importance of internet to student constitutes the most important aspect of academic enhancement; it helps and support students in acquiring knowledge especially the library students and other students. It also reveals that these students have different responses and different approaches in the importance of interne either by academic culture or for other reasons peculiar to them. The different categories of internet websites are used by students and their reasons for using them depend on the individual users. The findings also reveals that the students utilizes the internet in order to assist them in their various research works and thereby providing the needed information in their field of interest

The utility of the internet and its websites as an aid to student appears to be means and channel of enhancing their knowledge.

More importantly, the study seek to establish how internet importance are utilized by student in tertiary institutions especially the Imo State University student.

1.1 Background Of The Problem

The word internet is a connection of millions of computers around the glob, such that a user of one of the connected computers could have access to any of the other computers.

According to Benson (2002) the internet is a loose of inter-connecting commercial and non-commercial computer networks. The constituent networks are tied together by telecommunications lines and by their shared reliance on standard communications controls. The internet with a capital “I” refers to a world-wide system of linked computer system. When used with a small “I” it is a term used to mean a group of inter-connected local networks. The net is the global association of thousands of networks and millions of computers across the world that carries data and makes the exchange of information possible. This network of computers is also referred to as global information system or information super high way.

The internet is also known by some people as the web, this is the largest computer networks with thousands f network using a communication protocol known as TCP/IP which means Transmission Control Protocol/Internet Protocol.

The internet sometimes called simple “This Net” is a world wide system of computer networks (connections) actually, it is a networks of networks in which users or any one who uses one computer can if they have permission to get information from any other computers (and sometimes talk directly to users at other computers) on-line chat.
Before going into the project, there is need to shed light into information and computer because as earlier stated that the internet is a global association of thousands of networks and millions of computers across the world that carries data and makes the exchange of information possible. Like we know that computer is a mediator between the users because is through the computer that the user browses through the different website in the internet to get proper information.

The internet is devoted solely for the purpose of connecting people from different areas in the world and also providing or making available information in a particular subject interest of the user. It also enhances users communicating via-e-mail with peers in other cities, or other culture or through contact with expert in the filed of interest.

According to Madu (2004), the internet is a public cooperative and self sustaining facility accessible to hundred of millions of people world-wide.

Physically, the internet utilizes a portion of the total resources of the currently existing public telecommunication network. Technically, what distinguish the internet is its utility of set of protocol called TCP/IP.

The then Imo State University in Uturu was established in 1981 following the bill passed by the late chief Mbakwe’s Administration on the 13th of April 1981.

The school was officially opened in Etiti in 1981 with a second campus at Aba on temporary site. The school was letter moved to Okigwe by the then military administer major general Ike Nwachukwu (rtd).

The establishment of the school grew out of the need for an academic institution of the highest status owned supported and managed by the state in order to attend the academic of Imo indigene in gaining admissions into university the first phase of the permanent building for the university was later completed at Okigwe, with an ultra-modern university building. The university was renamed Abia State University Okigwe in 1992 following the creation of new Abia state from the old Imo state.

The objectives philosophy as aspiration of the university includes encouraging the advancement of learning in Imo state and Nigeria in particular to guide all persons without discriminations of race, set the opportunity to acquire higher education for the purpose of carrying the philosophy and objectives. The university and its vice chancellor professor O.E. Nwaebo 2009 till date.

The new Imo state university quickly matured and rose to the occasion to defend her future and defend her motto: Excellence in services guided by the philosophy and mission of the university as enunciated by the founding fathers.

The study is aimed at surveying the importance of internet to student of higher institution.
However, the specific objectives are as follows:

The following questions were formulated in line with the objectives of the study. They are as follows:

Considering the fact that internet is used in all faces of the economy and in all fields of endeavour, this study will be of great significance to the entire society particularly in academic institutions in Nigeria universities especially to Imo state library. The study will be of immense value to researchers conducting their studies in related subject as it will remain a useful and reference document. The study will also help in developing the knowledge of the researcher in the internet facilities in academic libraries in Nigeria.

The emphasis on this project is the importance of internet to students of academic institutions in Nigeria, means that the researcher will concentrate on the reason why internet is important to student. It focuses on the following departments as area of study.

Department of Library and Information Science and Mass Communication Students Imo State University Owerri.
Project is limited to the student of IMSU because the students have similar objectives for making use of internet resources in their academic institutions.

The state of facts of being great significance. It can also be an exaggerated sense of one’s own value.

Internet is the largest computer network in the world. It is a network of thousands of networks using the communication known as transmission control protocol/internet protocol (TCP/IP) (Oduagwu, 2008).

Here, the student can be seen as a person who is studying at a university or college.

Here, academic includes a lot of reading and studying rather than practical or technical skills especially studying in school and universities.

Here, institution is the highest level of education where you can study for a degree or do any research. They are institution for knowledge generation and development to become experts in many spheres of human endeavour.