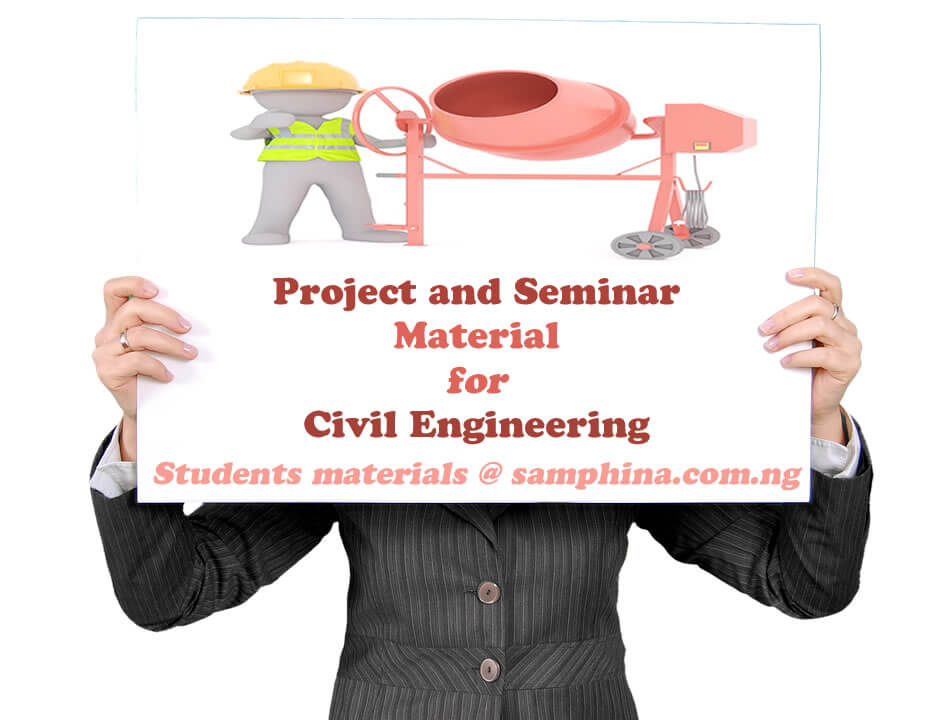 For a soil to be used for any structural purpose or construction, it must be compacted in order to ensure stability, unnecessary settlement. Also, for long lasting and increment in shear strength of the soil materials.

This was done by dividing the moist sample into five equal layers. Each, receiving 25 blows from the rammer of which, the maximum dry densities (MDD) ranged and, their corresponding optimum moisture contents (OMC) determined from the graphs plotted.

Also, particle size distributions, Atterberg limits (Liquid Limit and Plastic Limit) were also conducted on each of the samples. These enhanced to classifying soil samples from these different burrow pits.

Naturally or otherwise, soil is a loose material which is either consolidated or partially consolidated that overlies the bedrock. Therefore, soil is seen in abundance on the earth surface. In engineering construction, soils are compacted before they are used for construction in order to improve their engineering properties. Compaction helps to reduce the permeability of water into the pores of the soils and to resist internal scours by water veins. Thus, almost all structures both man made and natural are based on the soil. Fills for structures are compacted in order to avoid settlement which is likely to cause great harm to the structure and also affect life.

Many Civil Engineering projects require the use of soils for engineering fills. Such soils are to be compacted to a dense state in order to obtain satisfactory engineering properties which would not be achieved with a loosely placed materials.

Compaction of a soil is a process that brings about an increase in soil density or unit weight, accompanied by a decrease in air volumes. There is usually no change in water content. The degree of compaction is measured by dry unit weight and depends on the water content and compactive effort (weight of hammer, number of impacts, weight of roller, and number of passes). For a given compactive effort, the maximum dry density occurs at optimum water content.

For a given degree of compactions of a given cohesive soil, there is an optimum moisture content at which the dry density obtained reaches maximum value. For cohesionless soils, the optimum moisture content might be difficult to define. For some highly permeable soils such as gravels, uniformly graded and coarse clean sands, the results of the laboratory compaction test may provide only poor guide for specifications on field compaction.

It is very important to differentiate between compaction and consolidation.

In respect to this, dry density is a good indicator of compaction of sort mass instead of bulk density which will be attained with water content of the sort. The dry density of a soil sample is the ratio of achieved field density to the maximum dry density either standard or modified proctor compaction test, which is the most common criteria, being used in many earth work specification. There are three different types of compaction of earthwork. These include

This specifies the produce for the placement of the fill such as type and mass of equipments for the compacting thickness or number of passes.

This specifies the properties of fill as placed and compacted such as the achieved dry density ratio, placement of moisture content, air voids and undrained shear strength.

This specifies the behavior of the completed fill such as maximum settlement over specific period of time after filling.

Compaction on site is usually affected by mechanical means like ramming, rolling or vibrating. Compaction rammer is manual device/machine used in the laboratory for compaction test. The aim and purpose of laboratory rammer and mechanical compaction machine remains the same but varies in the area and extent of application and limited, as it covers only the laboratory test of various soil samples. If excess water is present in the void of soil skeleton, the large volume of the incompressible water acts as retardant which absorbs and dissipates the compaction energy, and result in lower compaction. When comparing, the compactive effort of soil with low plasticity and coarse grains, you will achieve lower dry density while the soil with high plasticity and fine grain, you will achieve high dry density.

Compaction is Applied on Soil

Compaction of soil provides the following basic data for soil.

The increase in the dry density depends on the following factors:

The compaction characteristics of the soil are improved by adding other materials known as admixture. The most commonly used admixture is lime, cement and bitumen.

1.2 Background / Location of Sites Of Study

These burrow pits are the areas of tested and approved materials for the construction of roads and other Civil Engineering works. The materials are then excavated from the burrow pits, hauled to the areas needed to be filled by such materials, with the use of dump trucks. Thus, burrow pit can be very expensive and might justify major design changes.

1.3 Objective of the Study

The objective of this study is to determine the effect of increased compactive effort on three different burrow pits using, compaction and dry density method of test of materials.

1.4 Nature and Scope of the Study

This project work specifies and indicates the effect of weight of different equipments or machines, when used on the soil. This is important when the soil is compacted in a specified manner over a range of moisture contents. Including that, which gives the maximum weight of dry density.

This project work ascertains the good effect and impact that can be created, when a heavy or an increased compactive effort is used for compaction on different burrow pit materials. It also justifies the importance of using a heavy compactive effort.

Continues in the Complete Material…

This research material “Effect Of Compactive Effort And Suitability Of Burrow Pit Materials For Sub-Base (A Case Study Of Eziama-Obaire Burrow Pit, Umudi Burrow Pit, Ikwerrede Burrow Pit)” is for research purposes and should be used as a guide in developing your research project / seminar work. For no reason should you copy word for word (verbatim) as samphina.com.ng will not be liable for any who copied the material.

samphina.com.ng is only providing this material “Effect Of Compactive Effort And Suitability Of Burrow Pit Materials For Sub-Base (A Case Study Of Eziama-Obaire Burrow Pit, Umudi Burrow Pit, Ikwerrede Burrow Pit)” as a reference for your research. The paper should be used as a guide or framework for your own paper. The contents of this paper should be able to help you in generating new ideas and thoughts for your own research. Use it as a guidance purpose only.

If you are preparing for questions that may be asked during your defense, then your answers will flow smoothly and effectively. This will prove your knowledge on the subject e.g “Effect Of Compactive Effort And Suitability Of Burrow Pit Materials For Sub-Base (A Case Study Of Eziama-Obaire Burrow Pit, Umudi Burrow Pit, Ikwerrede Burrow Pit)“, and strengthening your argument. Ask friends and family, read your work for them to listen to your presentation, and write down questions. You may be lucky the panel will ask you those you have already prepared on.

Not knowing your topic “Effect Of Compactive Effort And Suitability Of Burrow Pit Materials For Sub-Base (A Case Study Of Eziama-Obaire Burrow Pit, Umudi Burrow Pit, Ikwerrede Burrow Pit)” inside out will cause you to struggle and ultimately fail with your defense. You need to know the subject from every angle to ensure you are fully prepared for any question that may come your way.