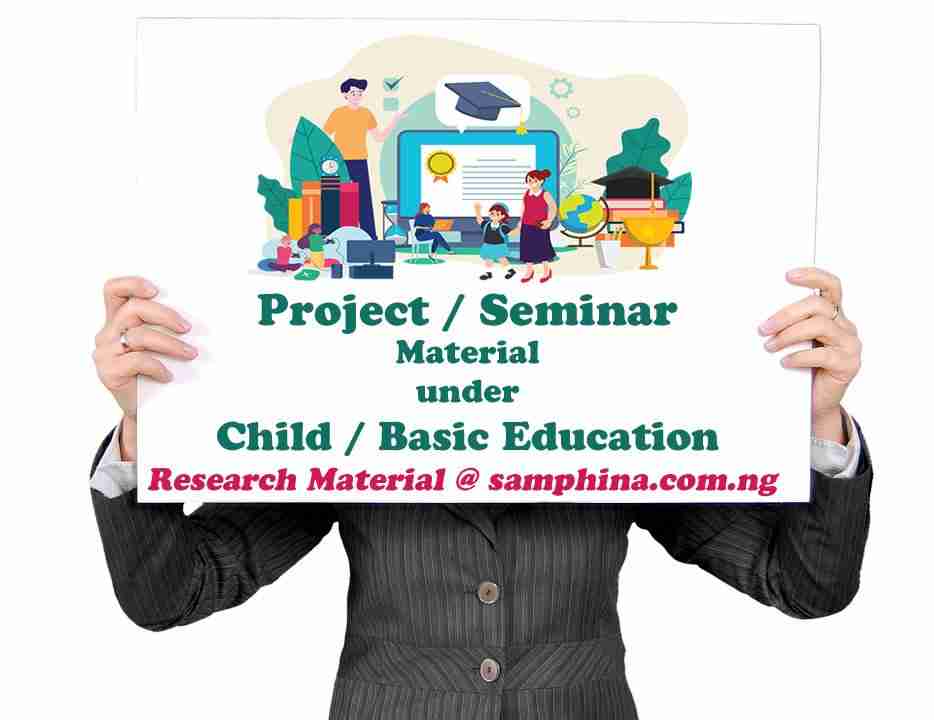 Child abuse and neglect are fastly becoming universal phenomena in the current world societies despite the fact the child’s rights are being recognized and even to some extent, protected by legislations and constitutions in many countries of the world. Childhood abuse potentially has major economic implications for Nigerian schools and for their students. Even conservative estimates suggest that at least 8 percent of U.S. children experience sexual abuse before age 18, while 17 percent experience physical abuse and 18 percent experience physical neglect (Flisher, Kramer, Hoven, & Greenwald, 2007).

Childhood maltreatment, and adverse parenting practices, in general, has the potential to delay the academic progress of students (Shonk & Cicchetti, 2001). It therefore has the potential to undermine schools’ ability to satisfy standards of school progress entailed in the No Child Left Behind legislation (U.S. Department of Education, 2005), putting them at risk for loss of federal funding. It also has the potential to adversely affect students’ economic outcomes in adulthood, via its impact on achievement in middle and high school (Cawley, Heckman, & Vytlacil, 2001). Child abuse has been defined by the African network for the prevention and protection against child Abuse and Neglect (ANPPCAN) as the intentional and unintentional acts which endanger the physical, health, emotional, moral and the educational welfare of the child. Hopper (2004) also described child abuse as any act of maltreatment or subjection that endangers a child’s physical, emotional and health development.

Gelles, (2007) affirmed that child abuse include not only physical assault but also malnourishment, abandonment, neglect, emotional abuse and sexual abuse. According to Mba (2002), prominent form of child abuse in Nigeria are child battering, child labour, child abandonment, neglect, teenage prostitution, early marriage and forced marriage. Kolander (2000) stated that emotional and sexual abuses are highly noticeable in Nigeria. Oji (2006) observed that babies born by teenage mothers in Nigeria were 625,024 as at the reporting time.

According to Walsh (2005), unwanted pregnancy has been identified to be a major cause of child abuse in Nigeria. Many abused children were unwanted in the first place and turned out to be a severe burden on their emotionally immature or impoverished parents. Odey (2003) stated that children from poor homes are more vulnerable to abuse and Todd,(2004) in his support said that Nigeria, which is are known corrupt nation in Africa is heading towards a dangerous poverty where her teeming population does not have enough food for healthy living. Oluwole (2002) equally lamented when analyzing the situation of children which are being used for house helps.

Child labour is the major obstacles to the achievement of education for all (EFA) and this result into a setback on the achievement of the world target of universal primary education by 2015. According to Onye (2004), child abuse is an evidence of poverty. Aderinto and Okunola (2008) equally recorded that some children reported that they were pushed into street hawking for maintenance needs of the family. That means that they are the breadwinners of their various families at their early age. It is a common sight in major parks and streets in Nigeria to see children of school age between 6-16 years as bus/taxi mates, hawking wares, pushing trucks for money or begging for money when they are supposed to in the classroom learning in the schools. All these point to the fact that the worst hit groups are children who are at the risk of diseases, exploitation, neglect and violence. Although, the potential impact of child abuse is large, but evidence of causal effects of maltreatment on children’s longer term outcomes in school is generally lacking.

The current state of evidence for a link between childhood maltreatment (physical and sexual abuse or neglect) and school performance is limited to negative associations between maltreatment and school performance. On average, children who are abused receive lower ratings of performance from their school teachers, score lower on cognitive assessments and standardized tests of academic achievement, obtain lower grades, and get suspended from school and retained in grade more frequently (Erickson, Egeland, & Pianta, 2003). Abused children are also prone to difficulty in forming new relationships with peers and adults and in adapting to norms of social behavior (Shields, Cicchetti and Ryan, 2004). Although, these examples of negative associations between child abuse and school performance are suggestive of causal effects, they could be spuriously driven by unmeasured factors in families or neighborhoods that are themselves correlated with worse academic outcomes among children (Todd and Wolpin, 2003).

In addition, not much of the previous evidence linking childhood maltreatment to worse school performance generalizes well to older children in middle and high school and to children not already identified as needing services. Evidence of the impacts of maltreatment on academic performance in the general population of middle and high school students is needed to establish evidence of effects on schooling attainment in the general education population and on economic outcomes in adulthood.

Using a large dataset of U.S. adolescent sibling pairs, this study explores effects of maltreatment—neglect, physical aggression, and sexual abuse on adolescents’ performance in middle and high school. First, the questions of how childhood maltreatment theoretically could negatively affect later school performance, and of how unobserved family background and neighborhood characteristics might influence ordinary least squares and fixed effects regression estimates of relationships between childhood maltreatment and later school performance, are discussed. Second, empirical estimates from models that controlled for observable and unobservable family and neighborhood characteristics are presented.

Grill (2009) stated that the school can do a lot of things about child abuse since it has a way of affecting the school system. The problem of child abuse have long been existing in Nigeria, and have even become more even devastating to the society has whole. That history of child abuse in Esan West Local Government Area of Edo State is as old as the persistence of the phenomenon in Nigeria itself cannot be overemphasized. Children suffered all forms of abuse ranging from child battering, child labour, child abandonment, neglect, teenage prostitution, early marriage and forced marriage. And in most cases, the parents are even at the centre of the root cause of all these social maltreatment.

The school though, as an agent of socialization portends to have a strong and overwhelming influence on the development of the child, but observation has shown that these essence of education could probably be defeated if the children are made to continually suffer the pains of child labour (Martins E.O. 2010). This study however, centers on the extent to which the school has been involved in its attempt to develop the child within the social context of child abuse. And It is in the light of these, that the study attempts to unravel the major causes of child abuse and how it affects the child’s educational performance.

This research project has its main objectives the problem of finding out the effect of child abuse on the academic performance of secondary school student in Esan West Local Government Area of Edo State. Moreover, this research study sets:

1.4 Significance of the Study

This study is to provide parents and school administrators with an insight into how much damage child abuse and especially hawking after school can have on the academic development of student in general. This study is significant as the findings will be beneficial to parents, guardians, teachers, school heads and all other stakeholders in the educational sector, as they will be better enlightened on the problems associated with child abuse. Such knowledge may curtail any further action of exploiting the child especially been used as object of raising family economy. Hawking no doubt expose the child to many social vices, thus the fact that the study attempts to create a model for proper upbringing of the child in the society makes it justifiable.

The study laid emphasis on the effect of child abuse and how it affects the academic performance of the child using secondary schools in Esan West Local Government Area as case study.

The following terms are defined for the essence of this work:

Harsh or ill treatment melted on any child; it could be by physical pr emotional means.

Any form of corporal punishment melted on a child by his parent, teacher or guardian.

Paying no attention, not given enough care, to leave undone what need to be done.

⚠️ Searching for a different topic? Perform a quick search

This research material “Effect Of Child Abuse On The Academic Performance Of Secondary School Students In Nigeria” is for research purposes and should be used as a guide in developing your research project / seminar work. For no reason should you copy word for word (verbatim) as samphina.com.ng will not be liable for any who copied the material.

samphina.com.ng is only providing this material “Effect Of Child Abuse On The Academic Performance Of Secondary School Students In Nigeria” as a reference for your research. The paper should be used as a guide or framework for your own paper. The contents of this paper should be able to help you in generating new ideas and thoughts for your own research. Use it as a guidance purpose only.

If you are preparing for questions that may be asked during your defense, then your answers will flow smoothly and effectively. This will prove your knowledge on the subject e.g “Effect Of Child Abuse On The Academic Performance Of Secondary School Students In Nigeria“, and strengthening your argument. Ask friends and family, read your work for them to listen to your presentation, and write down questions. You may be lucky the panel will ask you those you have already prepared on.

Not knowing your topic “Effect Of Child Abuse On The Academic Performance Of Secondary School Students In Nigeria” inside out will cause you to struggle and ultimately fail with your defense. You need to know the subject from every angle to ensure you are fully prepared for any question that may come your way.