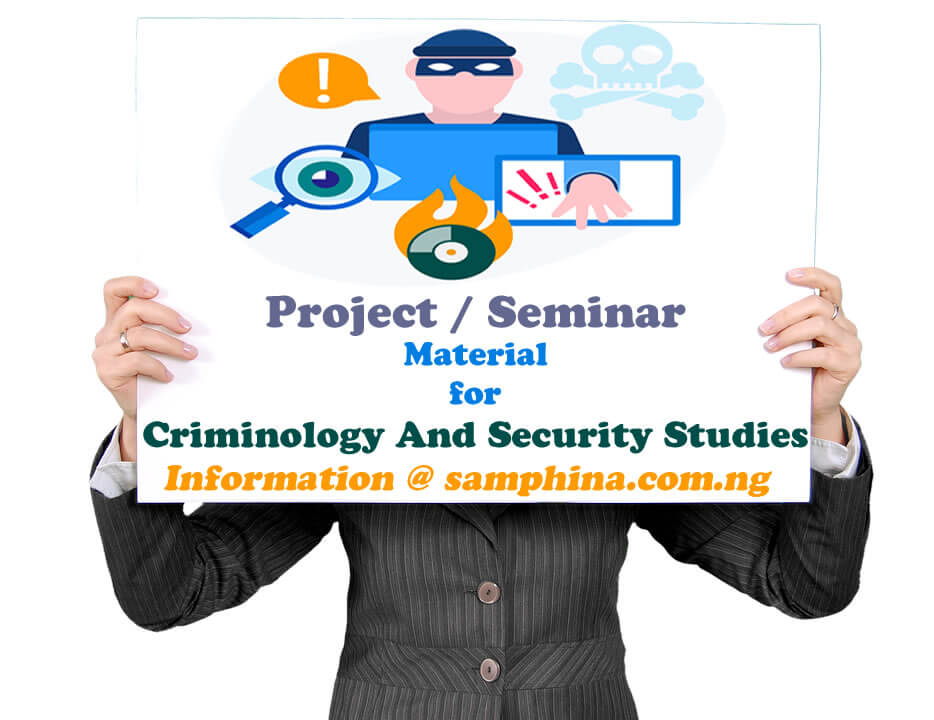 Many of today’s deadliest conflicts involves violent extremist groups that have transnational reach; combine political, ideological and criminal agendas; and demonstrate capacity to exploit dysfunctional relations within and among local populations, elites and states. Various of such groups are self-defined jihadists who articulate extra-state goals that seek to fundamentally alter the political status quo in the region where they operate or beyond. Resolving the complex and violent conflicts that involve such groups, their members, supporters and associates is a daunting challenge that requires carefully organized and targeted interventions.

According to the Global Terrorism Index report (2019), Boko Haram is ranked the fourth deadliest terrorist group in the world while Banditry Groups and Herdsmen attack by have been ranked the sixth deadliest terror groups in the world. The group is also known to be responsible for over 30,000 deaths as a result of terrorism (Institute for Economics and Peace, 2019).This terrorist group has been integral to the displacement of over 2.6 million people and is notorious as the most dreadful insurgent group in Nigeria. Having known this group for crime, no serious strategy has worked to ensure that the level of menace carried out by the group is reduced.

Among many transitional justice strategy, reintegration of former militants and repentant terrorist combatants by granting them amnesty is an issue of global concern for criminal justice systems. Amnesty as a pardon extended by the government to a group or class of people, usually for a political or crime offense. It is the act of a sovereign power officially forgiving certain classes of people who are subject to trial but have not yet been convicted(Wikipedia 2021). Disarmament, Demobilization, and Reintegration (DDR) programmes aimed at reintegrating repentant terrorist back into society have been multifaceted and there seems to be a growing interest in around the world on community-based activities in post-conflict settings (Kaplan & Nussio).

Nigeria is among a number of countries, including Iraq and Egypt, in which trials for terrorism suspects raise due process concerns. On February 2020, The Nigeria Senate established an agency to make life comfortable for ‘repentant’ Boko Haram terrorists irrespective of their wanton destruction of lives and property on the premise that simply detaining terrorist combatants indefinitely or executing them are no longer viable options hence they should be granted amnesty. This move manifested in 2020 when an estimated 1400 repentant Boko Haram insurgents were released and resettled back into the community (Adibe, 2020). While these are laudable, it raises a number of concerns about (i) the transparency of the selection process used for those being released; (ii) the capability of the Nigerian reintegration programmes (iii) amnesty to effectively screen the repentant to ensure they pose minimal or no threat to the host communities and (iv) how these move juxtaposes the concept of justice.

Similarly, existing policies on reintegration have tended to place less emphasis on the host community to which the deradicalized will be reintegrated which makes it more worrisome for the individuals in those community. Studies tend to suggest that the fear of reprisal from both the community and the terrorist organization might increase the risk of former combatant’s recidivism and re-involvement in terrorism and criminal activities which poses more threat to national security (Annan et al., 2009; Williamson, J. 2006 cited in Alexandar 2015). Therefore is upon this premise that this study is set to do an assessment of amnesty for repentant terrorist as a jeopardy against justice (a case study of public perspective).

In Nigeria, there are many illegal armed groups, ethnic paramilitary groups, religious fundamentalists, and fanatics. These have resulted in a series of bombings, assassinations, vandalism, armed robbery kidnapping and other forms of criminal activities. Yet when those suspected to be terrorist are apprehended for these heinous crimes the judicial processes tries to water down their prosecutions which alters the authenticity of the justice system.

Nigeria’s prosecution of suspected or repentant terrorist has been characterized by serious legal shortcomings, and the authorities are failing to prioritize prosecution of those most responsible for the group’s atrocities (Human Right Watch 2019). These events are clearly having a negative impact on Nigeria’s political, religious, and cultural landscape. Ignoring persistent public outcry against the release of the suspected insurgents, the Senate has begun a legislative process to grant amnesty to the terrorists, lawmakers plan to achieve by passing a bill for an Act tagged “National Agency for Education, Rehabilitation, De-radicalisation and Integration of Repentant Insurgents in Nigeria 2020, SB. 340.The bill is being sponsored by the immediate past governor of Yobe State, Ibrahim Gaidam, who now represents Yobe East Senatorial District in the National Assembly. It was learnt that proponents of this legislation believe that the Boko Haram suspects, who had inflicted unprecedented torture on and killed thousands of innocent citizens, particularly in the northern part of the country, should be made to enjoy what beneficiaries of the Presidential Amnesty for Niger Delta militants have been enjoying.

Several researchers have exhibited tension on the impact of this bill as this would not just encourage the terrorist combatant to perpetuate crime (knowing that they would be granted pardon, amnesty and reinstated into the society) but also this is a clear manifestation of jeopardy against justice. Research shows that while suspects of menial crimes are lawfully prosecuted and meant to face the wrath of the law, why then are heinous war crime like that of terrorism is pardoned under the shadow of presidential amnesty which invariably makes mockery of the concept of justice.

On the side of the citizens, the fear of the communities over this move is that, this repentant never left their old behaviour as they reinforce and raze more attacks on the host communities of which this viscous cycle leads to perpetual insecurity. Therefore it is upon this backdrops that this study is aimed at an assessment of amnesty for repentant terrorist as a jeopardy against justice (a case study of public perspective).

This study will be relevant to the general public. Specifically to policy makers, it will redirect their focus on revisiting the bill on National Agency for Education, Rehabilitation, De-radicalisation and Integration of Repentant Insurgents in Nigeria 2020, SB. 340 . To law enforcement agencies, it will enable enlighten them on the need to come with a working counter-terrorism strategy to combat the rising insecurity challenges of Nigeria. The study will drive the need for public awareness on how amnesty for terrorist perpetuates insurgency hence the government government should come up with solutions to end this cancer-worm of insecurity. More so it will drive the Judiciary and Human Right Activists, International Bodies to investigate and probe crimes committed by repentant terrorist and combatants. Finally the study will contribute to the body of literature on this field and serve as reference material for further academic research.

Financial constraint– Insufficient fund tends to impede the efficiency of the researcher in sourcing for the relevant materials, literature or information and in the process of data collection (internet, questionnaire and interview).

Time constraint– The researcher will simultaneously engage in this study with other academic work. This consequently will cut down on the time devoted for the research work.

Amnesty is a pardon extended by the government to a group or class of people, usually for a political or crime offense. It is the act of a sovereign power officially forgiving certain classes of people who are subject to trial but have not yet been convicted.

A Repentant is someone shows remorse for wrong doing and has a change of heart and change of direction. It involves a determination to stop wrong doing

Terrorist is a person who uses unlawful violence and intimidation, especially against civilians, in the pursuit of political aim

An insurgency is a violent, armed rebellion against authority when those taking part in the rebellion are not recognized as belligerents.

Terrorism, the calculated use of violence to create a general climate of fear in a population and thereby to bring about a particular political objective. it is the the unlawful use of violence and intimidation, especially against civilians, in the pursuit of political and religious aims

Justice is a concept of moral rightness based ethics, rationality, law, natural law, religion, equity and fairness, as well as the administration of the law, taking into account the inalienable and inborn rights of all human beings and citizens, the right of all people and individuals to equal protection before the law

This research material “Assessment Of Amnesty For Repentant Terrorist As A Jeopardy Against Justice (A Case Study Of Public Perspective)” is for research purposes and should be used as a guide in developing your research project / seminar work. For no reason should you copy word for word (verbatim) as samphina.com.ng will not be liable for any who copied the material.

samphina.com.ng is only providing this material “Assessment Of Amnesty For Repentant Terrorist As A Jeopardy Against Justice (A Case Study Of Public Perspective)” as a reference for your research. The paper should be used as a guide or framework for your own paper. The contents of this paper should be able to help you in generating new ideas and thoughts for your own research. Use it as a guidance purpose only.

If you are preparing for questions that may be asked during your defense, then your answers will flow smoothly and effectively. This will prove your knowledge on the subject e.g “Assessment Of Amnesty For Repentant Terrorist As A Jeopardy Against Justice (A Case Study Of Public Perspective)“, and strengthening your argument. Ask friends and family, read your work for them to listen to your presentation, and write down questions. You may be lucky the panel will ask you those you have already prepared on.

Not knowing your topic “Assessment Of Amnesty For Repentant Terrorist As A Jeopardy Against Justice (A Case Study Of Public Perspective)” inside out will cause you to struggle and ultimately fail with your defense. You need to know the subject from every angle to ensure you are fully prepared for any question that may come your way.